Now, Windows has released a list of many of the new features that will be found in Windows 7, which is supposedly releasing in the summer of 2009.  I must say, I wasn’t really expecting a lot, but some of these things are awesome and extremely exciting.

This is the strip along the bottom of the desktop that shows active applications. It’s been redesigned so that it behaves a lot more like the dock found in Mac OS X. You can drag applications to reorder them, and drop in icons that launch the apps that you use the most.  You can also view live thumbnails of what is inside of each open window, right in the taskbar, including individual tabs within a browser.  You can also jump straight to the tab that you want from the taskbar.  It will also provide you with controls for pausing and resuming playback on music or movies.

These menus are definite time-savers.  If you’ve used Google Chrome, you’ve probably made use of the new tab feature that brings up your most frequently visited websites.  This is what the jump lists will be, only they will apply to particular programs.  Available for each program in your taskbar and start menu, you can click on, say Firefox or Internet Explorer, and see your recent browsing history or even choose from a list of your most-visited websites.  When you click on MS Word, you can see a list of your most recently viewed documents. 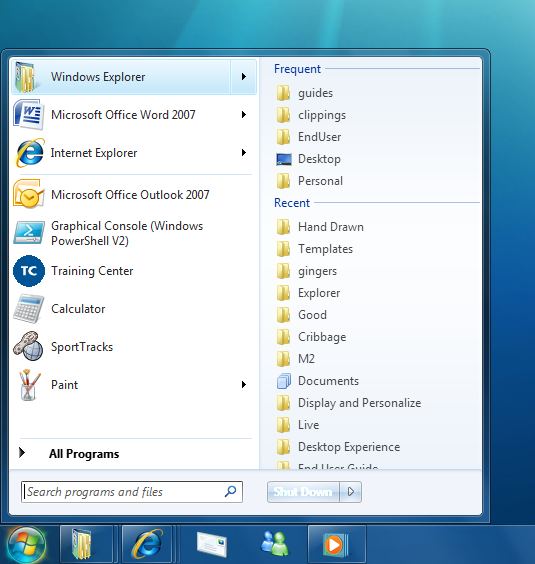 I have to admit, Aero was one of those features that I thought was nice looking, but probably not very functional, was Aero.  That’s what makes this even cooler.  Microsoft has revamped the feature, allowing you to make all of the windows transparent by simply hovering your mouse over the far right side of the windows taskbar.  You can also use the Snap feature to expand and maximize windows by dragging them to different edges of the desktop.  You can also make great use of widescreen monitors by lining up any window’s edge to either side of the desktop and it will snap and fill that half of the screen. 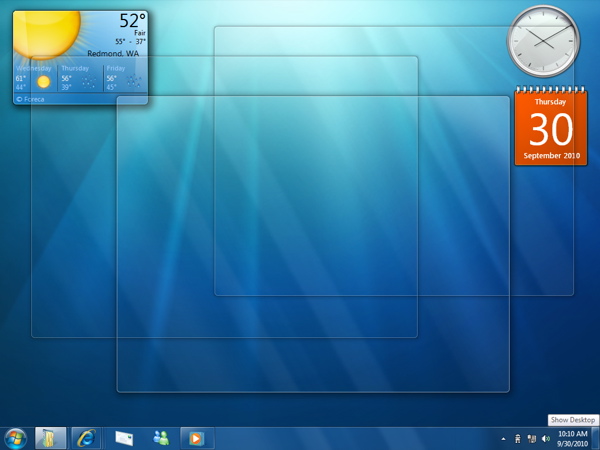 This feature learns as you use it, by bringing things that you use the most to the top of the results.  It’s a simple search box that is located in the start menu.  It brings up lightning-quick search results as you type.  The results extend beyond programs into contacts, e-mail subjects, document names, playlists, songs, and even names of settings in the Windows Control Panel.

Microsoft has worked hard at scaling back the number of yes/no prompts for approving system status updates. You can now change preferences to let only the most important messages through.

This is the feature that makes me the most excited.  If you have multiple Windows 7 PCs on one network, they will all find and connect to each other.  Users can then browse all of the media stored across the PCs as if they were all on the same hard drive.  For security reasons, you can disable sharing on any folder.  Not only that, but when you click on print, the system is location-aware, so it will pick the printer that is closest to you.

This is the new device manager that gives you a single place to interact with your gadgets.  When you’ve plugged in your cameras, MP3 players and printers, you’ll be able to see them all in the window, and see the details on the status.  From battery charge, to available storage space, to the date and time of your last sync, etc.  You’ll also be able to manage the content stored on each device, and do device specific tasks. 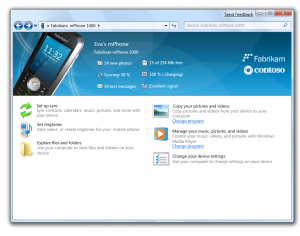