Okay, this has been an ongoing problem for me for about 3 weeks now.  I have a week left before we start shooting our videos, and need help ASAP.

I’ve been researching camcorders to fit the following specifications:

This is for a series of youth group videos, and I was thinking of getting 2 when I thought I could spend about $400/ea. but research has been more than confusing, as people generally have so many various views of great cameras, and in certain budgets they compare a $600 camera to an obviously superior $1100 camera.  (Duh, the higher priced camera is going to be better… it’s nearly twice the price!)

I’m not looking for anything TERRIBLY high as all the videos will end up on YouTube and perhaps DVDs to give to the kids after the summer.  I also want something that’s slightly future-proof.

Anything from Panasonic? Canon?

I found the Panasonic HDC-SD9 that seems to fit the specifications, some reviews I’ve found have scared me a little.

Anyone have some insight?  What would you do?

You can either comment here, or at Videomaker.com, or at Amazon.com 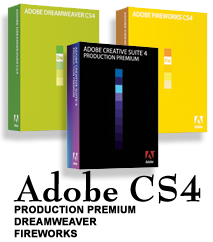 Yesterday, I took the plunge and ordered Adobe Creative Suite 4.  The great news is that I got free shipping AND saved $200 on the upgrade for Production Premium.  Hooray for that!

The bad news is the same problem that I had with ordering Fireworks CS4 was duplicated when I tried to order it again.  I had to create a separate order just to get it.  It shouldn’t have worked out this way, but it did.

I put the Production Premium CS4 upgrade into my cart, and followed that up with the Dreamweaver CS4 upgrade.  At that time, it asked me if I was in need of the upgrade of full version of Dreamweaver, to which I obviously answered with the upgrade.

I believe that is the root of the problem.  You see, it sets that option then, for every other individual software, or at least that’s my impression.  I suppose that if you were ordering upgrades for individual programs, it would save you a click or two, but it caused me to pull out my hair.  I would have liked to have an option to click OUT of that for other programs.  It would have made ordering the full version of Fireworks CS4 a breeze.  Instead, I put in my order for the other software (and selected the fastest shipping time available… hey, it’s free!).  Then I proceeded to the Fireworks page, and added the full version to my cart without a problem, submitting a second order.

At least the shipping is free on both.  But still, there’s an oversight that I’m going to report to Adobe at my earliest convenience.

I’m excited to check it all out, though, and to finally have Adobe software that makes use of the computing power that I have.  Now all that I need is Windows 7 64-bit (I’m skipping Vista), and instead of using only 3 GB of RAM, it’ll use all 4.  That’ll be a nice day.  Moving from 32-bit to 64-bit, and from 3 GB of RAM to 4 GB with a single install of what is reportedly Microsoft’s best operating system in years.