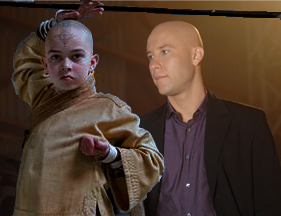 I didn’t spend a lot of time on this.  I meant to do more to match the lighting on Aang, but with limited time to land a joke, I just quickly threw this together.  The sources are the first picture of Aang from The Last Airbender, and a picture I found of Lex Luthor from Smallville.

Whoa!  Let’s just say that when CS4 is released, I’m definitely upgrading.  Take a look at this video.  If you want to see some really awesome stuff, go up to minute 16.